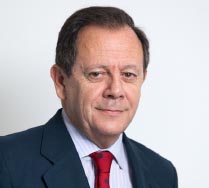 He specializes in Labor Law and Social Security, basically on strategic aspects in the legal areas of employment and human resources. Likewise, he is an expert on Criminal Procedural Law, Administrative and Constitutional Law.

Alfonso Martínez Escribano has been included in various prestigious legal directories such as BEST LAWYERS and CHAMBERS & PARTNERS, which rank him as a leading lawyer in the legal profession in Spain.