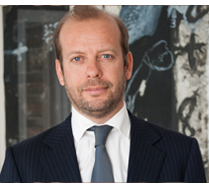 An active Lawyer since 1998, specialized in European Law, Real Estate and Spanish insolvency proceedings. He has been the General Counsel of MARTINSA-FADESA S.A., a public real estate company listed on the Madrid Stock exchange market, well-known for having successfully led the biggest Spanish bankruptcy procedure in History. He was awarded the Naval Cross of Merit Medal during his military service.